How's everyone doing? We're living in trying times, locked away in social isolation, scrubbing ourselves down every five minutes. But we can survive this: the human race has lived for millions of years and I'm sure we've got at least 10 left in us. But it's not all doom and gloom, being locked up in our homes has given us plenty of time to listen to great music because although we can't be together in person, we can still feel connected through entertainment. We've been selling a lot of great albums, both physical copies (sent safely, don't worry!) and a huge upswing in digital sales which is great! So don't worry people, even in these darkest of times, you can still rock hard, thanks to the Flicknife Kru!

Speaking of great albums, we told you that The Last Wave, by Schizo Fun Addict was going to sell fast... And we didn't lie! We sold the first lot SO quickly, we actually ended up pressing a second small batch. And they all sold out just as quickly! The forthcoming vinyl packages available from Fruits De Mer are almost all sold and ditto with the five packages we will get.

But don't despair, my good friends. If you missed your chance you can still get the album digitally, from here for instance (and on over 120 sites worldwide).

Impressive sales not enough to convince you to give it a shot? How about this glowing review from Dave Thompson over at Goldmine? 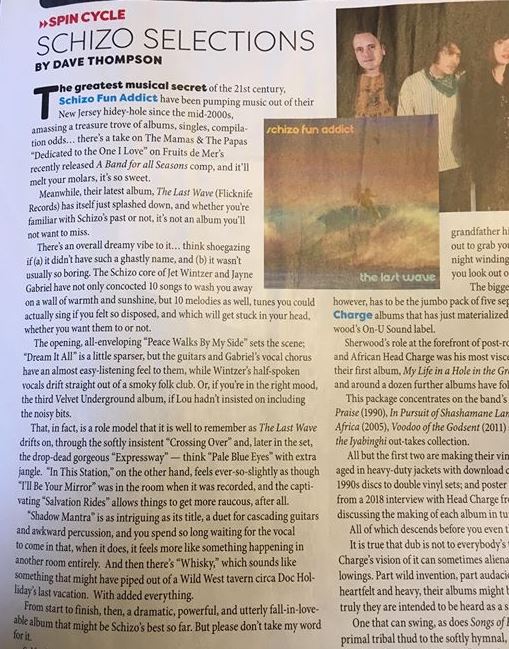 So, if that's not enough to get you to check out the worst kept secret in the business and quite possibly the best album we've ever put out... I don't know what will!

Another rising star on our playlists is 'Red Car' by The Indigo Rising. We mentioned this track in our last blog, and we're mentioning it again now because it's JUST THAT GOOD. It's been on rotation on two separate FM radios for a while now and the response has been amazing. Want to see what all the fuss is about? Check it out here.

Talking of playlists, don't forget this free, chilled version of 'Everything' by Electric Cake Salad.

In general, our Spotify Playlists have been having a grand old time, of late. We've been adding new tracks all the time, a lot of them from unknown, up and coming bands. The lifeblood of labels like ours! Plus, a few classics from the legends, just to keep you hooked. So give ‘em a look, if you're ever spotifying it up:

Lastly, something a little more personal. As many of you may know, if you follow us on Social Media, a while back I was recruited by The Nevers Podcast, a show dedicated to upcoming HBO Sci-fi Drama from nerd mastermind Joss Whedon. Well, it's been close to a year now and the show has BLOWN UP. We've put out a bunch of podcasts, a load of articles on our website and things are only going to get bigger from here. We recently did an Interview with Tony award winning actor, and one of the nicest guys I've ever spoken to, Denis O'Hare. So, if any of you FLICKERS don't get enough of me here, you can head over to www.hbothenevers.com or look for us on Apple Podcast, Spotify, Stitcher or wherever you listen to Podcasts, and give it a listen. I promise, it'll be a fun few hours!

That's a wrap, for now! Thanks for coming along for the ride and I hope you're all doing well out there. Enjoy the playlists, the podcast and all the great music in our back catalogue.

Catch you on the flipside and stay safe!